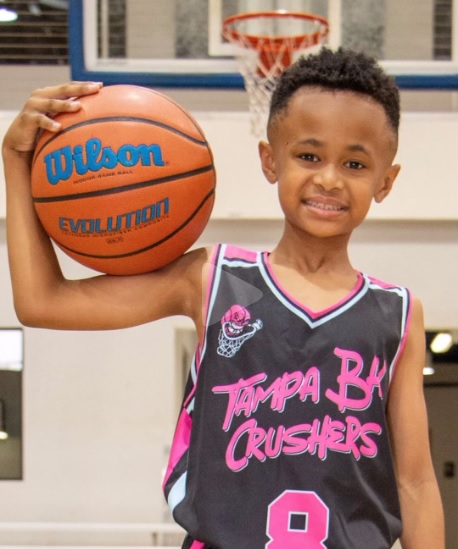 Kadesh "Cold Crushing" Rushing is currently ranked the No. 1 national player in the country for his age group by Middle School Elite (MSE). In addition to his skills on the court, the Tampa native is now the CEO of his own sports & apparel brand.
TAMPA, Fla. - PennZone -- Top-ranked basketball prodigy Kadesh Rushing, 8, of Tampa practically came out of the womb playing basketball. At just 15 months old, still in diapers, his love for the sport was pretty evident, according to his parents, Kenny and Monyetta Rushing.

"Around the age of 1 ½ years old, he had one of those Little Tikes basketball rims, and he would just have a field day with it. He would always carry around his basketball," the couple said.

Currently ranked No. 1 in the nation for his age group by Middle School Elite (MSE), Kadesh, who currently plays for the Tampa Bay Crushers, dreams of attending Duke University just like one of his role models, athlete Dariq Whitehead, and then ultimately advancing to the NBA.

More on The PennZone
"What I enjoy most about basketball is shooting and creating new moves," he said. "The sport has taught me that you need to be quick, have good form, good handles, good defense, good everything. It has also influenced me to push myself more to get quicker and stronger."

"Kadesh practices every day except for Sunday. We try to make that his 'Sunday Funday,' but there have been times when he still wants to practice," his parents added.

A rising sports star in the making, Kadesh is more than just a young, talented basketball player, though. The ambitious phenom is now also the CEO of his own sports & apparel brand. This month, he, with the help of his parents, officially launched Cold Crushing Enterprise LLC.

"I'm very excited about launching my own brand!" Kadesh said. "I did it so people could know who I am and cheer me on."

More on The PennZone
A year in the making coupled with plenty of creative input from Kadesh, his Cold Crushing brand offers backpacks, basketballs, slides, shirts, sweat suits, etc. for an affordable fee. According to Kadesh's parents, while their son's NBA dreams are important, so are having options.

"Kadesh knows the statistics of how few players actually get the opportunity to play in the NBA, so we wanted to create another avenue for him to fall back on," his parents said. "We teach Kadesh the importance of hard work on and off the court."

Products from Kadesh's Cold Crushing brand can be purchased at www.coldcrushing.com. His parents hope to eventually get their son's products also into his favorite retail store, Target.

Check out Kadesh's skills on the basketball court at this link.