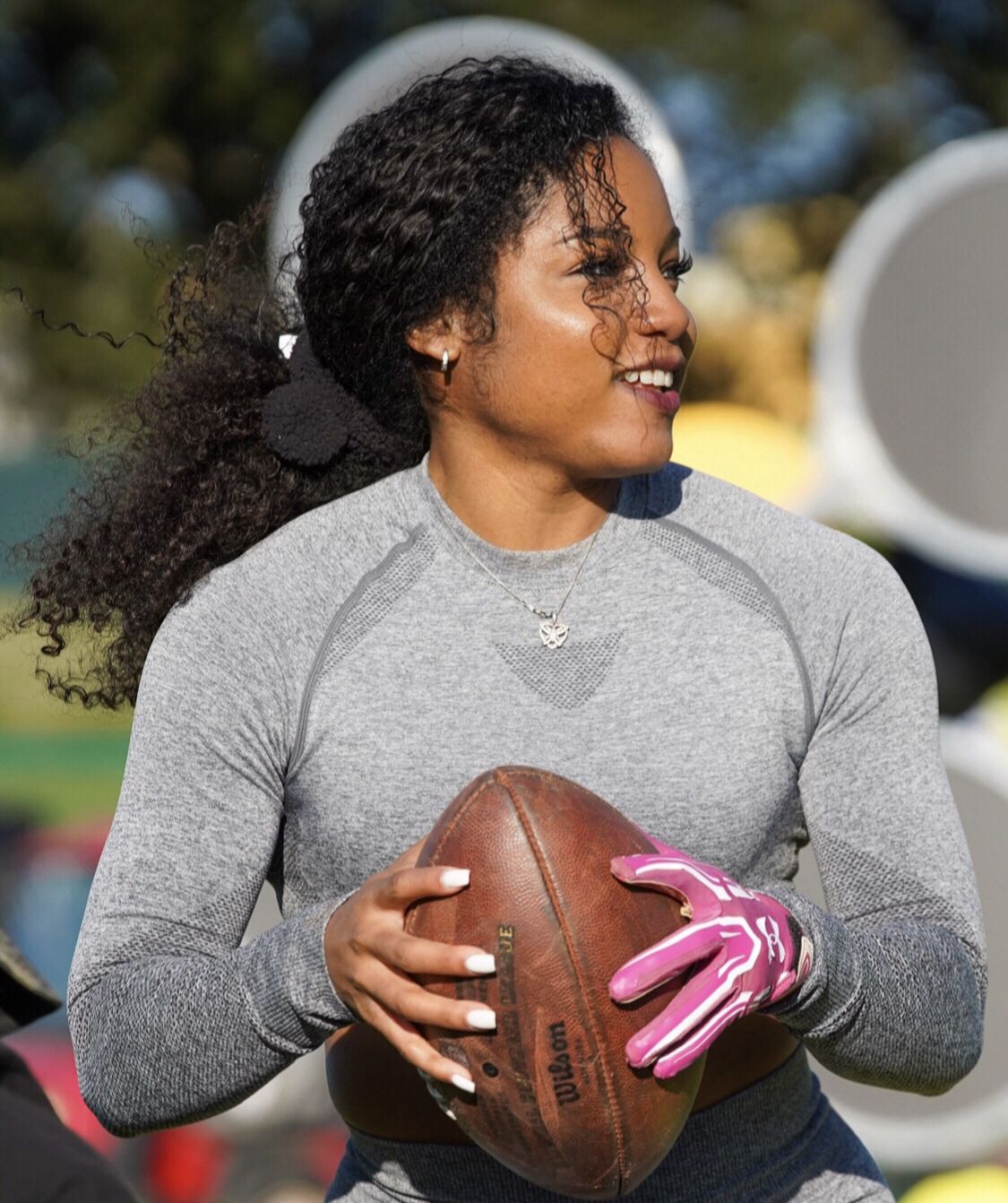 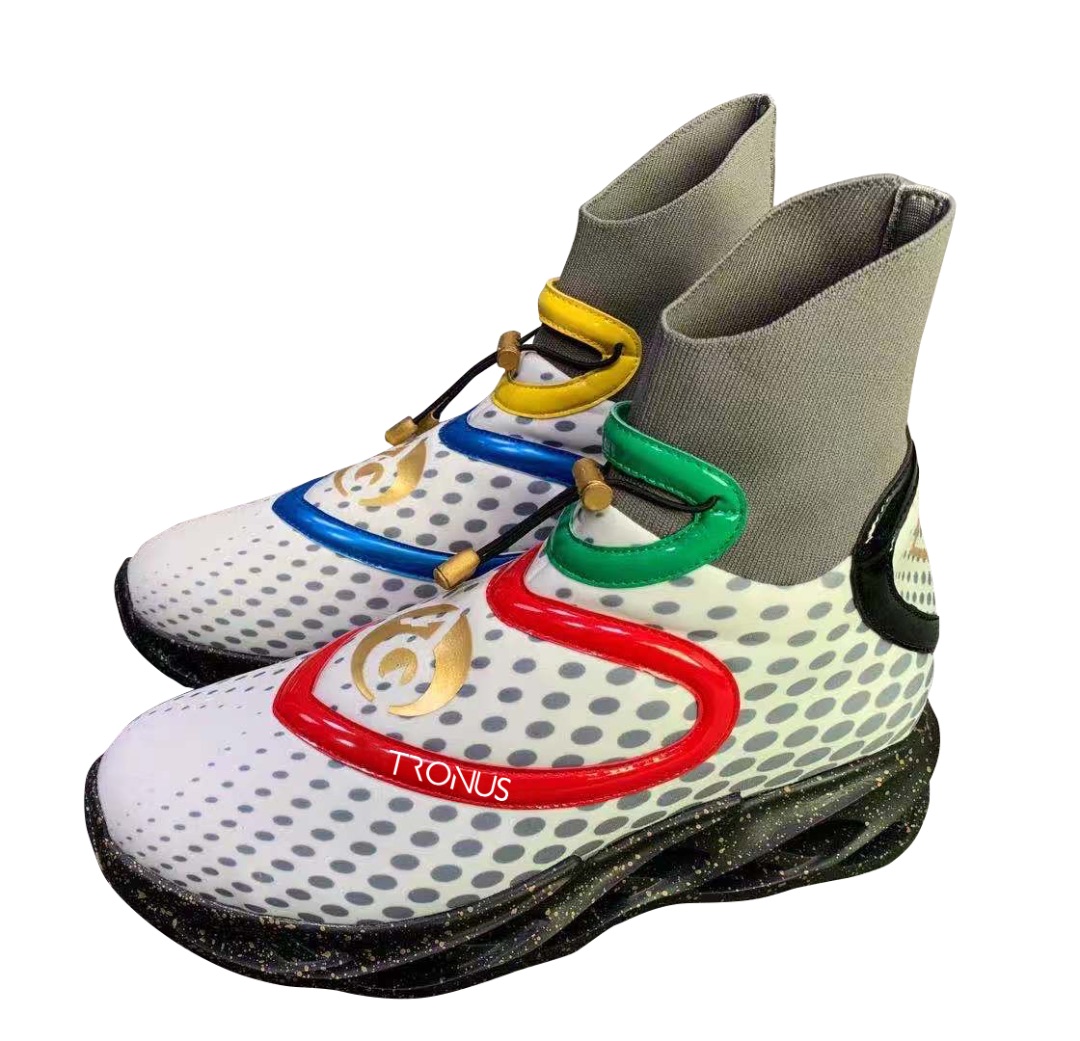 Not just a limited-time collaboration, nor a collection with one of the big names in the game . . . Santia Deck has founded her own sneaker company. She is the first female athlete to do so. TRONUS announced itself to the world on Juneteenth, 2020 and demand has exceeded all expectations.
ATLANTA - PennZone -- Breaking records in spaces that are traditionally reserved for men has become one of Santia's signature moves. In December of 2019, Deck signed a multi-million dollar deal with the forthcoming WFLA. That first-ever contract of its size for a woman playing American-style football helped solidify her unique personal brand - part athletic powerhouse, part social media stunner, all confidence. Her "Queen of Abs" moniker has become more of a mantra. Deck uses every platform she can to encourage people, especially young women, to aspire to the highest of heights with an almost royal level of confidence. She developed her own tenacity after overcoming challenges like bullying and scoliosis. Now that regal spirit lends itself to TRONUS, which means throne. With that air, Deck is excited about her new "first-ever" type accomplishment: becoming the first female athlete to own a sneaker company.

More on The PennZone
The response to TRONUS so far is auspicious. Years of planning behind the scenes has gone into this moment. After representing major shoe brands as ambassador, Santia decided she wanted her own shoe. At first, the goal was just a signature design under an existing company. Deck and her management brought on Jamien Sills an experienced footwear designer as creative consultant. Santia had a few design non-negotiables that kept bringing the project back to the drawing board. The shoe had to be unique, fashion-forward in its design, lightweight feel and athleisure style that customers would want to show off and collect not unlike the industry standards. Wanting to get her first attempt exactly right meant Deck and her team ended up learning a lot about the process and the industry. And so, the project goal evolved from a shoe to a shoe empire.

Deck established TRONUS and teased a few original concepts to her captive online audience. Hoping for feedback at best, the requests to buy shoes started rolling in before the company was even fully branded or had a live website. Since its Juneteenth announcement, TRONUS is offering free registration for VIP access which gives customers priority shopping hours before new products are released to the public; in addition to other perks. Within a week of opening registration, TRONUS had gained 10X more VIP members than they'd projected from only light promotion on Santia's Instagram page. The numbers thus far have the team concerned that they'll likely sell out of their first limited edition shoe with VIP access alone - before the public even has an opportunity to buy.  "Our marketing team hadn't even bought any paid advertising yet, so we were really happy with the initial numbers", Deck explained. Since then, multiple resellers have shown high interest in the brand's first offering. One even proposed to purchase the entire debut limited edition collection ahead of its release. Deck and her team kindly declined. They can see the big picture.

More on The PennZone
Business savvy women like athlete Serena Williams, and fashion force Rihanna have had successful collaborations with leading brands like Nike and Puma. Santia and her team hope to expand upon that narrative, building an industry-leading brand themselves with a Black woman at the helm . . . not just at the table. Deck and TRONUS want to compete with the big players . . . not just collaborate with them.

The VIP membership is free and available for anyone to register through July 19th. Pre-orders for the first shoe released by TRONUS will also begin on that day. Customers can sign-up and get more information via tronusofficial.com