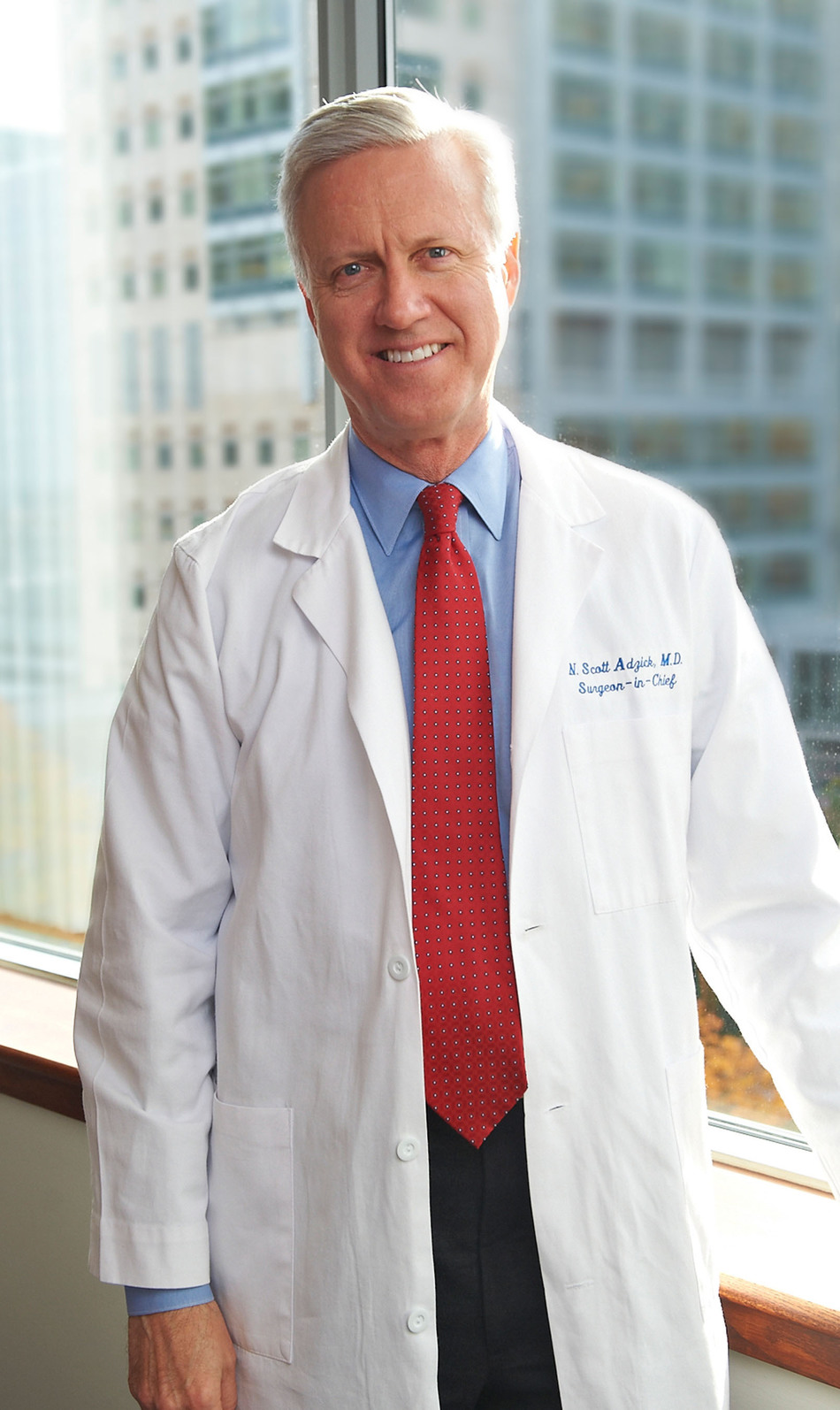 PHILADELPHIA, April 5, 2021 /PRNewswire/ -- Honoring his pivotal role in transforming fetal surgery from the theoretical to the routine, the Association for Clinical and Translational Science (ACTS) has awarded N. Scott Adzick, MD, Surgeon-in-Chief at Children's Hospital of Philadelphia (CHOP), the 2021 ACTS Distinguished Investigator Award for Translation from Proof-of-Concept to Widespread Clinical Practice.

Adzick has long been recognized as a leader in the field of fetal medicine and has dedicated his career to pursuing groundbreaking prenatal treatments for birth defects. During his postdoctoral appointment at University of California, San Francisco, he and his research colleagues developed fetal surgical techniques using animal models, some of the first research ever done on this practice, which at the time was still in its infancy.

Those early studies laid the groundwork for performing fetal surgery at CHOP's Center for Fetal Diagnosis and Treatment (CFDT), which Adzick founded in 1995. The CFDT is now the largest and most comprehensive fetal program in the world, with expectant mothers from all 50 states and more than 70 countries traveling to CHOP to receive treatment for their unborn babies. Adzick and his colleagues in the CFDT have performed more than 2,000 fetal surgeries and cared for more than 25,000 expectant mothers, making the procedure a widespread and life-changing option for babies and families.

More on The PennZone
Even with fetal surgery now a well-established practice, Adzick has continued to publish on the practice and explore ways to improve the methods and outcomes. He was a lead investigator for the landmark National Institutes of Health (NIH) Management of Myelomeningocele Study (MOMS), which demonstrated that fetal surgery could significantly improve outcomes for children with spina bifida; the findings were published in the New England Journal of Medicine in 2011. He has since co-authored several other studies demonstrating that these benefits endure up to ten years into childhood, leading to better mobility and quality of life for patients who undergo fetal surgery.

"I am honored to receive this award from ACTS, which feels like a culmination of work that began several decades ago and now has helped so many families," Adzick said. "It's immensely gratifying to see an idea that at one time seemed purely theoretical become widespread practice, offering an improved future to so many children."

More on The PennZone
"This past year, we have seen the massive mobilization of the full breadth and complexity of clinical and translational science and we have observed achievements never before dreamed of," said ACTS President Christopher Lindsell, PhD. "These awards reflect the outstanding contributions of our community of clinical and translational scientists, and their enduring commitment to healing and to the health of the world."

About Children's Hospital of Philadelphia: Children's Hospital of Philadelphia was founded in 1855 as the nation's first pediatric hospital. Through its long-standing commitment to providing exceptional patient care, training new generations of pediatric healthcare professionals, and pioneering major research initiatives, Children's Hospital has fostered many discoveries that have benefited children worldwide. Its pediatric research program is among the largest in the country. In addition, its unique family-centered care and public service programs have brought the 595-bed hospital recognition as a leading advocate for children and adolescents. For more information, visit http://www.chop.edu